Degrowth.de juillet 2015. En anglais. Civil disobedience shares a lot with the degrowth idea and movement. In the past, civil disobedience proved to be a powerful tool to fight for equal rights, labor rights, independence, peace and political liberation. Thanks to a growing awareness, an increasing number of struggles involving civil disobedience and non-violent direct actions have been influenced by if not conducted in the name of degrowth-related values, visions or claims, in Europe alone.  These have included actions to stop mining projects, to introduce radical changes in energy and water, to oppose major infrastructural projects of airports, highways and fast train railways etc. END_OF_DOCUMENT_TOKEN_TO_BE_REPLACED 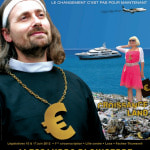